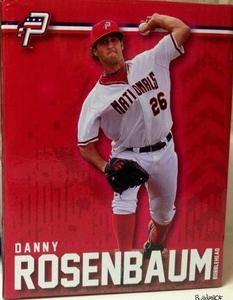 Danny Rosenbaum,formerly of the Washington Nationals and currently with the Colorado Rockies was kind enough to do another interview with us after his 2011 appearance.
Thanks again to Danny for coming back for another one with us...
Today Danny discusses AA and Eastern League Baseball on and off the field.

Danny,
Thanks for taking the time!
TRS:  Last time we talked,you had finished with Potomac,Now you have spent time with Harrisburg.Tell me a bit about the jump to AA...

DR: AA is a tough level. All those guys can play. They not only have the physical tools and talent to be there, but they know the game as well. Our coaches told us that you are only one step away. A lot of guys make that jump from AA straight to the bigs. It really becomes more of a mental game at this point. If you can stay confident and focused you will be where you want.
TRS: Many baseball people think that the jump from High A to AA is the biggest in the game.Do you agree with that and why or why not.

DR: Yes completely. First off the age level average is much greater. The guys in AA have been around the game long enough to know how to play it right. Players here have a much more consistent approach and are major league ready.

TRS: You got off to a terrific start last season in Harrisburg and then tailed off before rebounding a bit,did you get away from something that was working or was it just one of those baseball cycles that comes and goes?

DR:Yeah I got away from my approach. I was worried about all of the wrong things, instead of just going out having fun and competing like I always have.

TRS: Tell me a bit about the Eastern League.the EL has some cities that are larger than the lower minors of course-what were some of your favorite places to play in and the least favorite stops in the league?

DR: Eastern league wasn't that bad of travel since Harrisburg was kind of in the middle of everyone. Even though Portland was the furthest drive, I really enjoyed the atmosphere there. We had a chance to spend an off day there, so we went into downtown and got to try some good seafood. Bowie was cool because the Naval base is there. Reading also had a great atmosphere, and it had the pool in right field. I also liked Altoona's and New Hampshire's stadium.
Least favorite was Binghamton, there isn't much there and the stadium is old, maybe that why they are going to move.
TRS: What EL city was the most fun to hang out in off the field,which was the least favorite?

DR: Most favorite city to hang out was probably Akron because every time I went there I or to see my family. Least favorite was Trenton.

Tune in for part two where Danny's discusses his pitches,his pitching style and his injury from last season that makes me wince thinking about it!!!!
at January 17, 2013