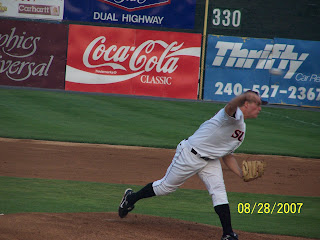 Here is part three of our four part interview with Erik Arnesen..

TRS: The Eastern League's travel looks easier on paper than the Carolina League,Is this true and is the CL travel as bad as it looks?

EA: The travel was pretty comparable. The distances are a bit further in the Carolina League, but the trips are all bearable. I spend a lot of time reading, sleeping, playing cards with the guys, or watching movies, all of which help pass the time. My wife makes fun of me when we’re traveling because she’ll call and ask where we are and I never have any idea, I just say, “Um, on the road”; we once drove past where I got married and that was the first I’d noticed we were in NJ.

TRS:Any good (or bad) stories from the road in getting from city to city?

EA:Thus far, the trips have been fairly uneventful. I’d say the worst event was when the A/C wasn’t working; it started as merely uncomfortable, but after a couple hours became unbearable. Luckily, our bus driver was something of a renaissance man and was able to pull over and fix it.

TRS: In your past interview,you said that coaches/trainers pick your roommates,is this the case in AA or do you have choices?

EA: You can request roommates, but there are no assurances. That said, all the guys are cool with each other so it doesn’t really matter who you room with on the road. Unless your roommate snores.

TRS:Who did you spend the most time with over the last two seasons?

EA: I spent a lot of time the last two seasons with Jeff Mandel , Andrew Kown, and Kyle Gunderson (until he got traded). We've played together a lot and we all like to golf. Adrian Alaniz and I were roommates in AA and we played a lot of video games together. I also hang out with Sean Rooney a lot.

TRS: Have the Nats given you any idea about you having a chance to move up to Syracuse for the 2010 season?

EA: I haven't heard anything about where I might start the season this year.

TRS:Did you have any concerns/thoughts on perhaps being selected in the Rule 5 draft in December?

EA: I wasn't too concerned with the Rule 5 draft. I thought there might be a possibility of getting selected, but I wasn’t expecting it.

Back tomorrow with Devils-Predators and maybe the final part of our interview with Erik Arnesen.