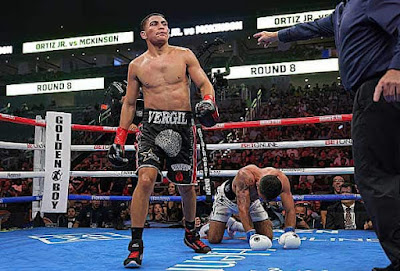 Undefeated welterweight contender Vergil Ortiz returned to the ring from a one-year absence to bully his way through a tough but outclassed Michael McKinson with a ninth-round stoppage in Fort Worth, Texas.

Ortiz hadn't reached the ninth round in his previous wins and he barely made it this time as a body shot sent McKinson to the mat with seconds remaining in the eighth round, which was just enough to allow McKinson to survive the round.

McKinson injured his leg on the knockdown and showed plenty of guts even attempting to continue but the first time Ortiz attacked, McKinson hit the floor again and his corner waved the towel to signal the end of the fight.

The fight played out as expected as the light-hitting McKinson didn't have nearly enough pop in his punches to keep Ortiz away from him and wasn't quick enough to outbox the stronger fighter.

My scorecard had Ortiz far ahead at the end of eight rounds at 79-72.

Give McKinson credit for effort but he was over his head and seems a better fit at the European level than among those of the world-class ilk.

As for Ortiz, he is now rated first in both the WBA and WBO but will be waiting for a while in the WBA as Eimantas Stanonis is ahead of him in their line and that's even before a potential Errol Spence-Terence Crawford unification that would slow things down further.

Should Spence-Crawford fall through, Ortiz could be a good consolation prize for Crawford and while Crawford would be a deserving favorite, Ortiz would be far from outgunned in his first title attempt.

If a title attempt isn't occurring right away, Ortiz would be best served to keep active but I'm not sure what opponent would be available for him.

Perhaps another attempt could be made for rugged veteran David Avanesyan to fight Ortiz or maybe Conor Benn could be convinced to give Ortiz a try, should his catchweight fight fall through against Chris Eubank Jr.

However, the most likely and easiest to make would be an in-house fight against Alexis Rocha, who will give Ortiz a good try but like Michael McKinson, isn't quite in the same league as Vergil Ortiz.

Hooker had a recent passing of a close friend in his personal life and it showed early as Hooker looked unprepared and unmotivated early with Cobbs scoring three knockdowns and Hooker barely making it through the second round.

Cobbs rebounded well from his first loss, a knockout defeat to Alexis Rocha but while Hooker deserves credit for hanging in there and even winning a few rounds after his terrible start, Cobbs was never seriously threatened.

Hooker may have some excuses for his out-of-the-ring distractions (Hooker also missed weight and had to pay Cobbs a set sum of money for the fight to take place) but he looked very slow and most of his punches were wild and winged punches.

Hooker's next fight could tell the final tale on whether or not he is a shot fighter- it's one thing to lose to Jose Ramirez or Vergil Ortiz, it's another to lose to Blair Cobbs.

Conlan boxed, Marriaga walked around, and although Conlan scored knockdowns in the seventh, eighth, and ninth rounds, none of the knockdowns saw Marriaga hurt, and all of them could have been scored pushes or slips.

Marriaga suddenly burst to life in the final round and even wobbled Conlan a bit but it was the only round that he won and it might make Conlan wonder if he is truly over the loss to Wood.