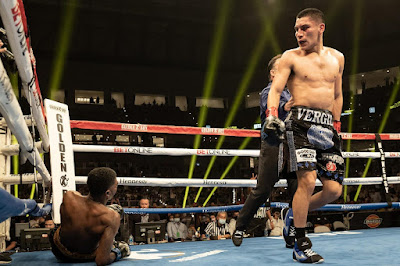 The boxing weekend is again a bit lighter than usual but there are some crucial matchups with one including the return of a talented young welterweight that only needs increased opposition to prove how good he can be.

Vergil Ortiz returns to the ring in the first time in nearly a year and faces an underwhelming opponent in undefeated Briton Michael McKinson from Fort Worth, Texas on DAZN.

The two were scheduled to fight in March but Ortiz dropped out due to a serious condition (Rhabdomyolysis) and McKinson decisioned late replacement, Alex Martin.

Ortiz has knocked out each of his eighteen opponents. After his most recent victims (former WBO junior welterweight champion Maurice Hooker and contender Egid Kavaliauskas), McKinson seems to be a cut below Ortiz's competition of late.

While McKinson's undefeated, he hasn't even fought the best European welterweights. although he does have a win over then-undefeated prospect Chris Kongo and in his twenty-two wins, McKinson only has two knockouts, so it's hard for me to see how McKinson keeps the power punching Ortiz off him for twelve rounds to win a decision.

The co-feature will see Maurice Hooker returning for the first time since his loss to Vergil Ortiz in March of 2021 against flashy Blair Cobbs, who suffered his initial defeat last time to Alexis Rocha.

Hooker has lost just twice and both by knockout, however, both were to top-notch fighters in Jose Ramirez and Ortiz.

Alexis Rocha is a nice fighter but he's not to the level of either Ramirez or Ortiz and he stopped Cobbs conclusively in eight rounds, so Hooker should be the clear favorite in this one.

Hooker has the height and reach advantage and seems to be the bigger puncher.

Cobbs has made some interesting fights in his career but I think he is a level below Hooker.

In the other challenge fight, Michael Conlan fights for the first time since his final round knockout loss in what might be the fight of the year to date against Leigh Wood.

Conlan led on all three scorecards of a great fight but couldn't hold off Wood, who landed a right hand that knocked him through the ropes outside the ring, and was out cold before he hit the floor.

Conlan's return from Belfast, Northern Ireland will be streamed on ESPN plus against veteran Miguel Marriaga, who has lost in three title challenges and has lost two of his last three in lopsided fashion.

Marriaga seems to be the perfect comeback opponent for Conlan- a decent name that appears to be a fading fighter isn't going to hurt Conlan and could allow him to gain some confidence after such demoralizing defeat.