Our trip to Ohio was fun as always,but a larger than usual vehicle offered more space,but a larger gas tank as well.
With gas prices fluctuating from day to day and in some cases hours,we stayed within an hour (Columbus) and the rest of the time closer than that to home base with consideration of the dollar.
My personal favorite gas story was a 10 AM fill up with gas prices at 2.64 per gallon and returning from Columbus a whopping 2.89!
One would have thought that a major event had occurred,but talking to my friend James that evening,it seems this stuff happens all the time and without any reason at all.
I give this area this much-gas is a little higher,but it stays reasonably consistent,no 25 cents per day price movements...

In any event,despite finally having a chance to stop and try Quaker State and Lube,which I have wanted to try for quite a long time,the highlight of the trip was the rematch of the Food Network's Food Feuds with the top two Barberton Chicken houses going Pollo an Pollo,but with us as the judge and jury on this battle.
It's a bird battle between Belgrade Gardens and White House Chicken! 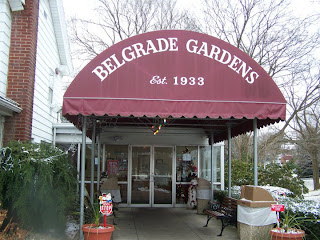 The initial idea was for us to try one this year (Rachel chose Belgrade Gardens) and the other in next years visit,but driving through the area on our way home,I asked if anyone wanted to have lunch at White House assuming that I could find it.
When Rachel almost leaped over the seat with her approval,I knew that I was onto a decent idea. 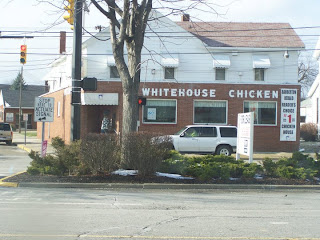 Belgrade Gardens is the oldest chicken server in the area having started in 1933 to White House's 1950,but both subscribe to the basics of the "rulebook".
The chicken comes in fresh (usually daily) and will never hit a freezer.
Chicken is seasoned only with salt and are deep fried in lard.
Now,one can see that as delicious as this is,you might buy that this might not be the healthiest meal that you can ever eat,so keep that in mind.
Barberton chicken also cut the meat a bit differently as they sell small pieces off the leg as "drumettes" and sell the back,which in most places is just not cut off the breast.

I ordered the same meal at both with two chicken breasts,fries and cole slaw.
The big difference between the two chickens to me was the crust of the chicken.
White House has a more of a "Golden Brown" type,while Belgrade goes with a thicker crust that seals in the juices of the chicken even more than White House,which does an excellent job of doing just that.
According to the Food Feuds show,this is because Belgrade runs its chicken through the breading machine twice to White House's once and it does show when you look at the chicken.
Both places had great fries and cole slaw,but there was a difference as one had the best slaw that I have ever had.
A mix between a traditional cole slaw and a pepper slaw made Belgrade Gardens slaw the best that I have ever had.

Between the slaw and a slight edge to the chicken,both Rachel and I gave a slight edge to Belgrade Gardens although I would highly recommend both to anyone in the area!
Why wasn't Cherie involved in the voting? Well,she isn't that big of a fried chicken fan......
One other issue-Parking.
Belgrade has a huge parking area,while White House is on the corner of a busy Barberton road.
Best parking for White House is the shopping center across the street,but the road across might take a while..

For more on Barberton chicken try the reviews of Exploring My Way,which is an excellent blog by a writer that travels Northeast Ohio trying interesting places.
Tom Noe's look at Belgrade Gardens and White House can be found by clicking each eatery's name.
I have also added his blog to the links to the right....