Rangers by a razor 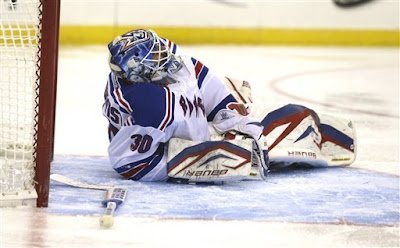 The New York Rangers used a second period goal by Rick Nash to snap a two all tie and held on for a 3-2 win over the New Jersey Devils at the Rock.
The teams swapped goals in the first period in an interesting first period to set up the game winner.
Travis Zajac (5 power play) and Anton Volchenkov (1) scored for the Devils.
The fading Devils hit the ice on Thursday in Carolina against the Hurricanes....

1) Just another night of everything being tried and little going in.
31 shots is a nice evening,but what is the quality of some of these shots?
I seem to write this often,but still...

2) Henrik Lundquist earned a penalty against Travis Zajac by flopping to the ice and lying there for attention.
The problem was that Zajac did not touch him-the Rangers Dan Girardi did.....

3) Johan Hedberg was fine for the most part,but his misplay of the puck led to the Michael Del Zotto shorthanded goal and I thought the Nash goal was stoppable.
Good,but not good enough....

4) Martin Brodeur activated off IR and backed up Hedberg,
Brodeur should return against Carolina.
Thank you!!

5) If you think the Devils need to make a deadline deal,Mark Fayne might be the centerpiece.
Fayne is highly thought of by some and has been a scratch recently.
Could that be a sign of things to come???

6) Alexei Ponikarovsky left the game in the second period and did not return.
Ponikarovsky would be another loss to a team lacking in depth and scoring....
at March 20, 2013