Our interview with Sean Nicol continues on a surprisingly snowy Monday.

TRS: You spent time at four levels in 2011,what were the differences in pitching at the higher levels? 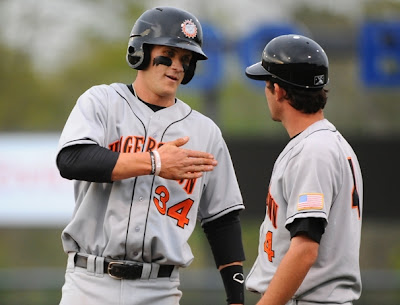 SN: The differences in pitching was that the higher each level, the more pitches a pitcher could throw for strikes and pitchers could spot up their location almost every time.

TRS:  Tell me a bit about your experiences with Stephen Strasburg after his injury,was that exciting or crazy?

SN: Strasburg is an awesome guy and a great team mate. I enjoyed seeing him interact with us despite all the hype. He is very humble and easy going.

TRS: What was the Bryce Harper mania like in 2011,was it similar to Strasburg or different and if so how?

SN: It was different because there were fans at every game that drove hours just to see Bryce. He is an exciting young player and has a lot of talent.

TRS: How do you think Harper handled all the fuss for a 18 year old?
Were you in Hagerstown the night he blew the kiss to the Greensboro pitcher?
What were your thoughts on that,if so?

SN:  Bryce went out and handled his business on the field every night. he is a great player. I was in Hagerstown the night he blew the kiss, and he was just standing up for the team. what the media didn't portray was that the pitcher we were facing was yelling in our dugout and taunting players. Bryce got the best of him and just was taunting back, he is a competitive players, as we all are.

TRS: What were your favorite and least favorite ballparks and town in the South Atlantic,Carolina and Eastern leagues?


SN: To be honest I don't really know about ones I dislike, so much in each of the leagues. Winston Salem was a great field, and many of the fields in the eastern league are great. New Britain (AA twins) is awful for an infielder. the dirt is terrible and it took bad hops almost every time, I disliked playing there as an infielder.

Off Mike by Mike Emrick