We have out first interview of 2014 as we bring back lefthander Danny Rosenbaum for another chat with ThoughtsofRS.
Danny moved to within one step of the majors last season having spent the season at AAA Syracuse after being drafted by the Colorado Rockies in the Rule V draft and then returned to the Washington Nationals by Colorado after spring training. 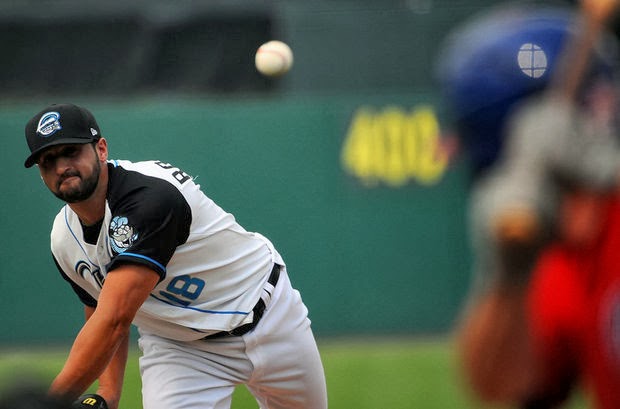 In today's installment,Danny talks some about his experience in Colorado.


TRS: When we talked last,you were drafted by the Rockies in the Rule Vdraft. What were the differences in how the Rockies do things and theNationals?

DR:There wasn't really a big difference. Both organizationswant to win. And they both have the talent to do so.

TRS:If you had to
pinpoint one thing that kept you from making the Rockies,what wouldyou say that was?

DR:  I'm honestly not sure. I thought I had a really goodspring and I thought I was going to make the team. Unfortunately theyfelt differently about it.

TRS: What was the experience like of going toa new organization for the first time?

DR: It was different. I reallydidn't know anyone at all. But everyone was extremely friendly andwelcoming. I really enjoyed being with that organization for the shortamount of time that I was with them.

TRS: How were you told that youwere not going to make the Rockies and that you were going to beoffered back to the Nationals?

DR:  They sat me down with the GM and themanager and told me that they didn't see me making the opening dayroster, but they were going to try to trade for me because they reallyliked me and wanted to keep me in their system. But the Nats wanted meback which was a good thing as well.

TRS:Do you think that you haddifficulties in adjusting to a relief role in your initial springtraining?

DR:I have never relieved before. It was definitely a differentfeeling coming out of the pen. But since they were making me the long relief guy,it really wasn't
too big of a transition.

Please let me know your opinions on the cut and paste look.
The interview font was very hard to read and I wanted to make it more legible.
My apologies for the look of the interview,but I feel its more important to give a little in ascetics to make it easier to read.....
at February 24, 2014

Great interview. I learn more in interviews like this than I do from the paid beat writers. Have a great Spring Training, Danny, and thanks for taking the time to do this!

Thanks for the kind words.Stay tuned over the next few days for further parts in the interview.