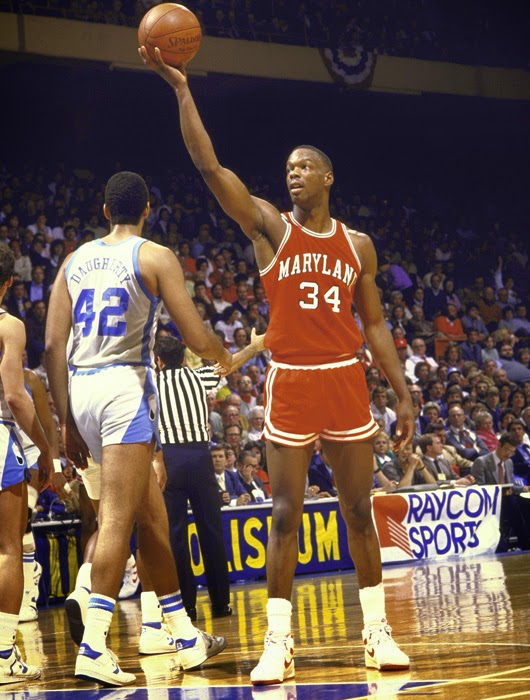 Every year around this time, I think back to the days of my youth when college basketball meant so much to me.

It's been 28 years since Len Bias overdosed on cocaine and began a ripple that would affect the NBA for years.
However, to me, it was almost yesterday.
I'm going to save the what if's and a look back at the playing career of Len Bias at Maryland for another day to tell the story of me on that day.

In every person's life, there are a few events that you remember where you were and what you were doing when they happened.
For my grandparents, generation-it was Pearl Harbor.
For my parents-the assassination of President Kennedy and for me, there have been three.
The explosion of the Space Shuttle Challenger on national television at a time when such things just didn't happen, of course, 9-11 and if you were on my age and lived in the Mid-Atlantic, it might have been the death of Len Bias.

Living here as a child, ACC basketball was at the top of the sports food chart and as a Maryland fan, I suffered from frequent wins and often heartbreaking losses.
When I was growing up, the boogeyman was Dean Smith and his North Carolina Tar Heels as the Duke Blue Devils were just beginning to move up as I neared graduation and usually were of little concern to the Terrapins, that rivalry would mature later.
Len Bias was a hero to me and other Terrapin fans.
Bias was the only Terrapin that not only equaled Tar Heels stars but surpassed them,
Maryland had plenty of great players, but only with Bias, did the Terps have the type of star that could single-handedly take down the Heels.
That's right-Len Bias was better than Michael Jordan in college.
I'm not saying it would have been that way in the NBA, but he was in college.

I had been to a friend's house to watch the NBA draft as my house had cable,but not USA network,which covered the draft then a few days before to see Bias be passed over by the Cavaliers picking first (they took Brad Daugherty, which worked out, but I thought he was so soft from his UNC days) which ticked me off.
I was mowing the grass and came in for a break and as I took a drink, the news broke into my Aunt Edna's soap opera to announce the death of Len Bias.
They interrupted programs in this area. that's how big Len Bias was.

It was the beginning of the war on cocaine.
Before that, people either didn't pay attention to its dangers or put it out of sight out of mind.
After Len Bias, people began paying attention and drug use began to be focused on instead of being blissfully ignorant.

It's funny how things go as time moves on.
The 17-year old that loved basketball has become the 45-year old that is somewhat jaded towards it.
Physical changes and mental changes through the years, I wonder if a similar incident happened today how I would react.
Likely not with nearly as passion, I'm sure.
We deal with these things in the news far more often today and it is numbing, but 28 years ago, the world changed for me.
I never looked at athletes in the same way after Len Bias passed away.
I rooted for them, liked them, but it was changed for good.
For good or bad, they became people that did something well not someone to be put on a pedestal.
Change isn't always for the soft...

Maybe next year, I can write about Len Bias the player and how much fun he was to watch!