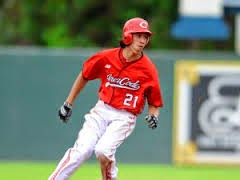 The Pittsburgh Pirates apparently chose need over best player as the Pirates selected Cole Tucker with their first pick in the amateur draft.
Tucker is a 6'3 Arizona high school shortstop that has the body frame to move to other infield slots or possibly stay as the long term shortstop.
Many observers appear to think that this was a bit of a reach and the Pirates decision to make a "need pick" brought back memories of the selection of Tony Sanchez in round one that proved to be a disappointment.

Tucker is projected to be a player with gap power and not a real threat to develop power as a plus tool,so think of more of the typical Pirate shortstop than an Alen Hanson type.

The Pirates used the pick obtained from the Marlins for Bryan Morris on Connor Joe from the University of San Diego.
Joe is listed as a catcher/first baseman,but could be moved to the outfield.
Joe hits nine homers for the Toreros,but is said to have more doubles power (21) than homer potential in the pros.
Most saw this as another reach,but the Pirates may be keeping their high picks low money wise in order to go after some hard signs and gambles in the second round of the draft today....

I may be back AGAIN as Giants top pick Tyler Beede pitches this afternoon,so I may be back with a scouting report tonight.....
at June 06, 2014