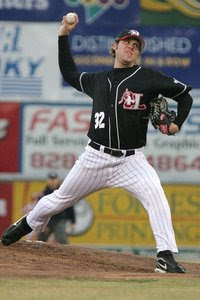 The Hickory Crawdads finished their only trip to freezing Hagerstown by splitting a Double-Header with the Suns.
Hickory grabbed game 1 6-5 and fell in game 2 2-1 in 8 Innings.
In the opener,the Crawdads jumped out to a 4-0 lead in the top of the first.
James Boone hit a two run shot (his 1st of the year),Jim Negyrch tripled home Jamie Romak and then scored on a wild pitch to account for the Hickory tallies.
Hagerstown battled back in the lower half of the stanza with 4 runs of their own.
Chris Marrero smacked a ground rule double to score Mike Daniel and Justin Maxwell followed by hitting a conventional style double to score Stephen King and Marrero.
Maxwell would score on a throwing error off a pick-off attempt at 1st by starter Michael Felix.
The Crawdads would re-take the lead in the top of the 5th,as Kris Watts reached second on a two base fielding error by Suns left fielder Francisco Guzman.Watts would eventually score on a single by Angel Gonzalez.
Hagerstown came right back to tie in the bottom of the 5th on Joe Napoli's home run to center field.
Hickory scored the game winner in the top of the 7th.
Eddie Prasch walked to lead off the inning,Prasch stole second and scored on an Angel Gonzalez triple.
Charles Benoit pitched the final two innings to get the victory.

The Nightcap was a pitchers duel that with a few breaks could have went Hickory's way.
The Suns struck 1st when a rushed double play attempt left 1st baseman Jared Keel's attempt to control the ball come short allowing Alex Nunez to score.
Hickory was down to their last strike when Jared Keel redeemed himself a bit by doubling to center to score Jamie Romak from first.

Hagerstown won it in the bottom of the 8th
With one out ,2nd baseman Michael Ambrose bobbled a Double play ball off the bat of Chris Marrero.Ambrose recovered to toss Marrero out at 1st,but Michael Daniel was able to move up to 2nd on the play.
This proved fatal to Hickory as Brett McMillan blooped a ball to left that scored Daniel to end the game.
Aaron Jackson got the Hagerstown win,Kyle Pearson takes the tough luck loss for Hickory.

Other Miscellanous from today.

Michael Felix struggled today early in a attempt to keep his hands warm.
It appeared to affect his breaking stuff much more than his fastball,which hit 91 at times today.
Felix ,because of the trouble with the weather,had trouble gripping the ball,which led to the problems with controlling the off speed pitches.

Eric Krebs was simply DOMINATING today.
Krebs threw 5 Innings,only 1 (undeserved )run and only 2 Hagerstown hits,while fanning 8.
We may be hearing much more from Krebs,who looks a lot like Brett Favre facially to me.
More on Krebs and my other scouting reports on the Crawdads over the next few days,but I will say this-From what I saw-the skeptics that had Hickory being a weaker club may have to revise their opinions.
The pitching during this series was impressive to say the least.

On the signing front-Every Hickory player that I had cards of,were signed over the course of the series.Good signing team and thanks guys for the help.
On the negative side-Suns Management continues to alienate their hardcore fans by blocking off an unused area from the autograph collectors.
This move forces the collectors all into a small confined area,much like the cattle chute at a rodeo.
The claim is that the area in question has been sold ticket wise and I dont doubt that at all.
I am sure that is the case,however,none of the collectors wants to sit there,they just want to have more space during the pre-game signing period and the area never has fans there during those times.
Over the 3 home dates,not one fan was seated there during the games.
Great move by the new GM.(Insert sarcasm here).
More on the ridiculous maneverings of this management team coming soon.

I talked to several Crawdads and likely would have had a possible interview or two for everyone here,but I was told by an unnamed Hickory player "I would have no problems doing it,but we were told in Spring Training during a meeting that we werent to talk to blogs".
The last thing I want to do is get these guys in trouble with Pittsburgh management,so it kinda died there.
I dont agree with the policy,but it isnt the players policy,they are just following orders.
Not a smart move by the Pirates though,IMO,as the bloggers are usually the people that care the most about the organization,why not toss them a bone?

So apparently among the most important issues for the Bucs is making sure Low A players dont talk to blogs and worrying about facial hair on their players.
As Fred Flintstone once said "Ohh Boy".............

Next into town here will be the Lake County Captains (Cleveland Indians),hopefully they will sign as well as the Crawdads!


More stories from the Hickory 5 today,which I will share as the week goes by,since the Suns are out of town for 10 days.

Thanks again to a bunch of great guys-Bradley Clapp,Mike Crotta,Michael Felix, Jared Hughes and Eric Krebs.Loads of fun talking the game and getting to know you .
Hope to see you guys,either in Delmarva for your series there in July or eventually in Frederick,when you are members of the Lynchburg Hillcats.

I will be at the 4/15 Frederick Keys-Myrtle Beach Pelicans games,as well as the 4/18 Keys vs Lynchburg Hillcats game.
My first chance for the Pelicans/former Rome Braves to sign some stuff,so we will see how that goes.

The New Jersey Devils lost 3-2 to the Islanders in a shootout.
The loss gave the Islanders the final playoff spot over the Toronto Maple Leafs.
New Jersey will play the Tampa Bay Lightning in the 1st round of the playoffs.
Wonderful.More Southern hockey-Yay.

Nice info, thanks for posting it.

The stuff about not talking to bloggers is weird, but that's the Pirates. Billy Beane and JP Riccardi, among others, have given interviews to bloggers. But that's what you get when you're more concerned about corporate spin than about baseball.

Did you notice how hard Krebs, Benoit and MacFarland were throwing?

I thought the policy made no sense as well.
I know Billy Beane does 3 or 4 interviews a year with Athletics Nation,yet a 10 min chat with a low A pitcher gives too much info??

Benoit was in the high 80's topped out around 90.
McFarland about the same.
Krebs was consistently in the low 90's and touched 94 at least once.
Very impressed with Krebs!!

Fail to the Chief by Thom Woodley

Eight Man Out by Eliot Asinof

Glory of Their Times by Lawrence Ritter

The Reign of Wolf 21 by Rick McIntyre
Tweets by @ThoughtsofRS