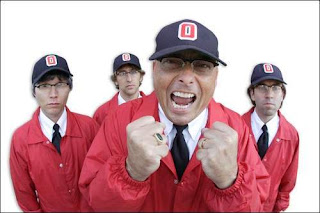 This is the day that I look forward to all year.
My feelings are below,Language alert...

If Ohio State beats michigan today at the Horseshoe,it will set two records.
One will be the sixth straight Big Ten title and even though some of those are shared titles,with the upcoming championship game eliminating shared championships-that is a record that may never be broken.

The other is a record setting seventh straight win over the school up north.
Rich Rodriguez (I didn't like him before he became their coach) finally has the wolverines headed to a bowl even with a loss,they would finish 7-5 and go to a small bowl,but Rodriguez still isn't out of the boiling pot yet,I don't think.
If today is a huge Buckeye win and the bowl game is a loss,combined with the off the field issues,enough may be enough for Rodriguez,who never seemed like a good fit for the Big Ten anyway.
I am torn on this as I dislike Rodriguez,but he has torn their program down so much that I wouldn't mind seeing him stick around for a while.
Especially with Jim Harbaugh of Stanford being rumored as his replacement,I would not want to see that.

I know Ohio State has owned the series since Jim Tressel has been in Columbus (Only one loss),but I always take the bad guys seriously.
In this rivalry,you get arrogant at your own peril.
I never get tired of beating them,so here is hoping that another win goes to THE Ohio State University!
Go Bucks!
at November 27, 2010