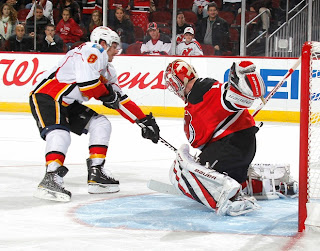 Anything for a Kenny Powers reference,so last nights win for the New Jersey Devils over the Calgary Flames gave me the idea for the title.
Ilya Kovalchuk scored the only goal of the shootout to lift the Devils to a 2-1 win over the Flames at the Rock.
David Clarkson (4) tipped in a Mattias Tedenby goal in the first period for the Devils goal in regulation.
The Devils will be playing back to back matinee games with a trip to Long Island on Friday against the Islanders and hosting a Saturday matchup against the Flyers.

1) This one has to go to Jonas Hedberg,who propped up an anemic offense with a super all round game.
The win over the Flames was a better outing for the Moose as he needed to be razor sharp in this one and he was just that.

2) The win was the first time this season that the team had won back to back games.
As the immortal Lou Brown once offered "We've won two games in a row. If we win tonight, its called a winning streak It has happened before"...

3) This was a pretty slow game to watch.
Brent Sutter and the Flames out trapped the Devils and arguably should have won the game and without the play of Hedberg would have done so.

4) Have to give John MacLean credit for going right back to Ilya Kovalchuk in the shootout after Kovalchuk's debacle against the Sabres in the Devils last shootout try.
I liked putting him in the first position as well as a way to boost confidence and keep him out of a slot with pressure until things get re-established.
Good call...

5) Despite not scoring a point,I thought Patrik Elias had a nice night and he was stoned on the Devils best offensive chance of the third period on a brilliant save by Henrik Karlsson,who I was pretty impressed with.