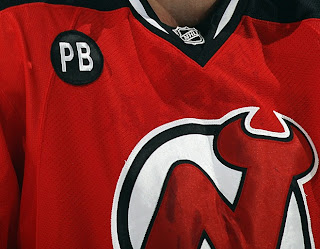 The New Jersey Devils woke up from a three game slumber with a roar as they slammed the Washington Capitals 5-0 at the Rock.
Devils goals to Jason Arnott (7 and 8),Patrik Elias (3 Power play),Mattias Tedenby (3 Penalty shot) and Dainius Zubrus (3).
Johan Hedberg earned the shutout.
The Devils will host Calgary tomorrow at the Rock as part of a three games in four day swing over the Thanksgiving holiday weekend.

1) As if the score indicates,the game was the best game played all season by the team.
The Devils added defenseman Mark Fayne to the team before the game and Fayne made his NHL debut in the win.

Hedberg was sharp and with only one exception (a clang off the pipe) made all the saves and never put himself into any real danger.
This is the type of backup that the Devils are paying for and with the injury to Martin Brodeur,the Devils will need some more outings like this from Hedberg. 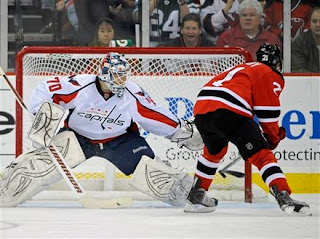 Arnott used his long wingspan to reach a puck that seemed out of his range and swept it past Braden Holtby.
The big veteran has certainly picked up his play as of late and boy,is it needed!

4) However,my favorite of the night was the third of the first period goals as Mattias Tedenby whipped Holtby on a penalty shot that he used the backhand for.
Tedenby scored the other hand on the backside and goalies will soon learn to respect the Swede's backhand or suffer the consequences!


5) Another highlight was late in the game when Brian Rolston beat Alex Ovechkin to the puck on a Washington power play and forced Ovechkin to grab Rolston's stick for a penalty.
I found that amusing on many levels..

6) The team honored Pat Burns before the game with a video tribute and the team will wear patches on the home jerseys for a while to honor PB.

7) Since everyone is now acknowledging that Pat Burns will be going into the Hall of Fame on the next ballot,why didn't the voters do the classy thing and put him on the last vote,so Burns could have seen it?
If the qualifications are there now,they were there then!

8) Brent Sutter brings the Flames to town for the first time since Sutter jumped the Devils ship before last season.
I wonder what the reaction from the crowd will be and especially if the Devils are able to build on the win over Washington and win another game,will Sutter be serenaded???
at November 23, 2010