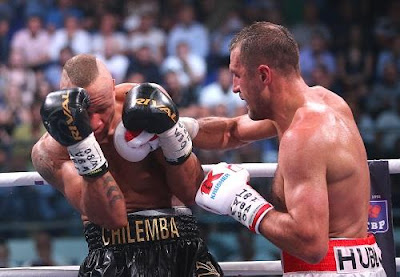 In his return to his home country and in his final prep for Andre Ward,Sergey Kovalev hammered out a workmanlike unanimous decision win over Issac Chilemba.
Kovalev knocked Chilemba down in the seventh round and hurt him badly in the eighth,appearing to be on the verge of ending the fight.
However,the plucky Chilemba managed to hold off the onslaught and was not in serious danger over the final four rounds.
I had Kovalev a 117-110 winner on my scorecard as he retained his WBA,IBF and WBO light heavyweight titles.

While it is true that Kovalev may not as been as sharp as usual,lets give some credit to Chilemba,who fought well in defeat.
Chilemba,who won three rounds on my card,might have worked his way into consideration for a future TRS rating at 175 rounds and will give any fighter in the division a tough night.
Kovalev might benefit more from a hard 12 rounds for the November Ward fight than with another quicker knockout and could see some of the advantages in that bout...