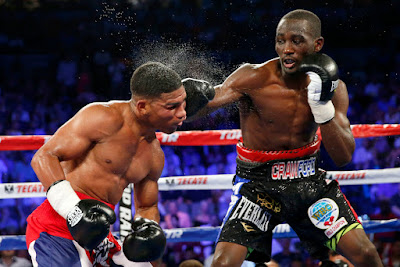 The boxing challenge features a bout for the fight fan on pay per view that is better suited for premium cable as the best two junior welterweights in the world face off in Las Vegas.
WBO champ Terence Crawford will unify his belt with WBC titlist Viktor Postol's and as good of a fight as this is-Crawford isn't ready for PPV and Postol really has just one elite level win-his last bout vs Lucas Matthysse.

So why is this on PPV?
Call it HBO budgetary problems and the network couldn't really afford the bout,so promoter Bob Arum and Top Rank decided to make the fight on pay per view and hope for the best.
Both fighters are talented,but I'm not sure that the styles are going to mesh for an exciting bout.
Talented featherweight Oscar Valdez goes for his first world title as the co-feature as he faces Matias Rueda for the WBO title vacated by Vasyl Lomachenko after his win of the same title at 130 pounds...

I lead the boxing challenge over Ramon Malpica 84-69