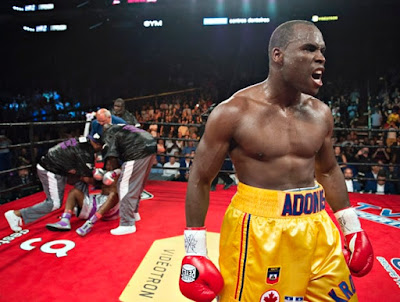 Adonis Stevenson retained his WBC light heavyweight title in a pretty entertaining scrap as he disposed of Thomas Williams in the fourth round in Quebec City.

The defense was the latest in several lopsided title retentions against overmatched competition for Stevenson,who has seen his reign be more notable for who he hasn't fought (Sergey Kovalev most prominently) than who he has.

Stevenson may have been well above the talent level of Wiliams,who lacked a notable win other than a two round shootout against another fringe contender in Edwin Rodriguez,but give Williams credit-he tried to win.
Williams threw punches (many of them wild) and even appeared to sting Stevenson a time or two,which brings to mind the criticisms of some observers (including me) of Stevenson's chin being questionable.
However,in the end,the superior power of Stevenson shone through and after some rehabilitating body shots Stevenson ended the bout with one power left.
The strong moments of Williams almost never happened as Stevenson dropped Williams late in the first round and Williams was almost finished then and there.
Stevenson's next opponent will be his WBC mandated contender in undefeated Elieder Alvarez,who fought on the undercard and delivered a drizzlingly boring decision win over late replacement Robert Berridge.
Looks like defense number eight might be little better than what we have seen already from Stevenson and his title defenses.

I don't dislike Adonis Stevenson,he's a fun fighter to watch and his power combined with a chin issue makes most of his fights somewhat entertaining,
My issue is with Stevenson's blatant ducking of Sergey Kovalev and to a lesser extent Artur Beterbiev,which would be a fight easy to make as both are under the same promotional umbrella.
Every champion has the right for occasional optional defenses as long as they are mixed in with quality opponents as well-Stevenson has not faced a top ten caliber opponent since Andrzej Fonfara over two years ago and even then Fonfara built his name more from the decision loss to Stevenson and thereafter then anything done before signing for the bout.
Stevenson-Kovalev or Stevenson-Beterbiev would be fun and exciting fights-must see fights for the fight fan.
Unfortunately,either (or both) Stevenson or the PBC has little interest in those fights and prefer these pro wrestling like squash matches.
Stevenson uses the nickname Superman,but as a comic fan,I know this-Superman didn't make his rep by beating the Clock King and the Rainbow Raider-he built it by beating top notch opponents.