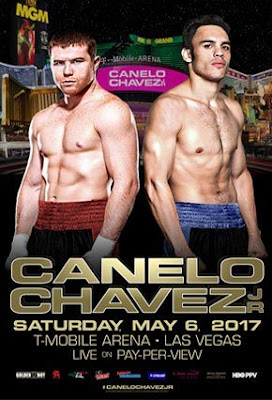 The boxing challenge returns with a weekend pay per view bout that features more real bad blood than a major fight in years as Canelo Alvarez takes on countryman Julio Cesar Chavez Jr in a catchweight bout at 164 pounds.
I've noted in the past about not liking catchweights,but I don't have an issue this time because there is not a championship on the line.
If a title isn't on the line,they can do whatever the promoters/fighters wish and I won't complain...

I've said even before this fight was announced and when it was just rumored that Julio Jr would give Canelo all he wanted,if he was able to come into the fight in shape.
It appears that he has done that and I have a feeling that we could see a good toe to toe battle in Las Vegas-don't rule out the possibility of a huge upset.
The challenge features two undercard fights with the return of Lucas Matthysse and a squash match for David Lemieux for a possible fight for Canelo Alvarez,should Canelo win over JCC.Jr and avoid Gennady Golovkin.
Joseph Parker will be defending his WBO heavyweight title against late replacement Razvan Conanu in New Zealand after Hughie Fury dropped out two weeks ago from his mandatory title shot.