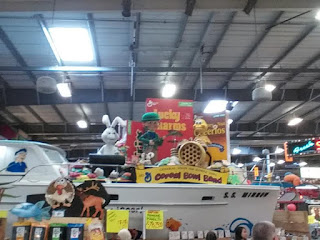 The final day of our journey was spent in Western Ohio,where I had driven through with Ryan last year and Cherie had never been.

Cherie had found a place that I had never heard in researching the trip in Jungle Jim's International Market just outside of Cincinnati.
Jungle Jim's is a kitschy type of place that I love and I had such a blast with Cherie!

With lots of displays,Jungle Jim's looks like just another extra large supermarket.
Until you get to the cool display's that feature grocery icons,such as the Campbell Soup can,the General Mills cereal characters playing as a rock band and what appears to be a tiger dressed up like Elvis and sings songs and the unique qualities of Jungle Jim's begins to shine through.
Jungle Jim's features more items from around the world that you can imagine and for me,the best part was the over 1,000 hot sauces (In alphabetical order) and loads of hot spices and seasonings.
You can be sure that I bought a few things from both of those departments,but there was so much more as every items seemed to have so many choices. 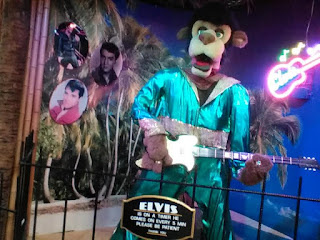 I saw the McDonald's Big Mac,Filet O Fish and McChicken sauces that were supposed to be only sold in Canada,tons of potato chips,vegetables that I had never even heard of,let alone seen from different countries,fresh fish of all types with many of them swimming live in tanks and more than I can even type!
Another super part was aisles upon aisles of different imported items.
It wasn't just a few items,it was many items from not just a few countries,but many countries and I loved seeing all these items that you cannot get elsewhere.
We spend over two hours just wandering around the store and we came nowhere near seeing the entire place!
We spent 75 dollars and could have spent far more-there is something to be said for making decisions!
Another decision was to leave as we decided to make the 90 minute trek to Wapakoneta for a return to the Neil Armstrong museum.

I had visited the museum last year with Ryan and suggested it as one of many places for the trip to Cherie,who selected it.
We had such a great time at Jungle Jim's,but needed to leave in order to make it to the museum to have plenty of time to look around.
The museum was pretty much the same as last year except for a new film to replace the one from last year,which was very dated to be honest,but Cherie seemed to like it as much as I did and thought similarly to me that it was an interesting mix of what people of our age remembered of things created in the 1970's,yet with some things being updated.
The museum isn't likely to change much as it isn't affiliated with the national system,but the far less funded Ohio Historical Society,but I really enjoyed for the space buff and the person that might not be as interested should keep their interest as well.
I wasn't going to buy anything,but I had told Cherie that last year I had bought a snow globe,which narrowly beat out an Armstrong bobblehead (helmet on,not off) and I was getting to leave and she said "you may not ever be here again,buy the bobblehead",so I listened and now I'm glad that I did!

We left for our hotel and we were hungry.
That might be because other than a light continental breakfast at our hotel, we hadn't ate,so we stopped at a midwest chain pizza place that we both liked-East of Chicago.
Now,East of Chicago isn't Donna D's in Ashland,but it's good and being a small chain,it isn't too processed.
They had a buffet,but we were the only people there and it scared me some because I didn't know how long the pizza had been sitting,so I decided to order us a medium pizza and a appetizer of fries since we hadn't ate.
This allowed me to slip to the car and get the surprise of the trip.

I had bought Cherie something a few days before,despite being "warned" that the trip would be the anniversary present to both of us.
I just wanted to get her something else that would be meaningful to add to the occasion and had smuggled it into the car. 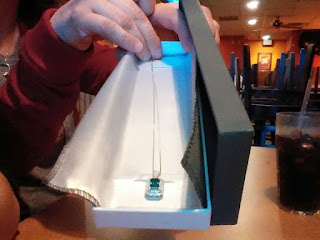 I bought her an emerald necklace since emerald is the birthstone of the month of May,which (duh) was the month that we were married in.
I really think I surprised her and I hope she enjoys it for a long time to come!
Back to the hotel for the evening and the trip home was pretty uneventful with the exception of a good finishing dinner at Red Lobster in St.Clairsville,Ohio,which is a town that I've seen more in the last year than in the previous years of my life combined!
Thanks to Cherie's good friend,Christine Hinkle for the gift card that helped pay for it!

Thanks to Cherie for such a wonderful trip and I hope you enjoyed the look back at the trip and its stops.
I'll be back to normal for a few days,so I'm going to shoot for a signing front,a badly needed inbox cleaning and a preview of Cavaliers-Warriors.....