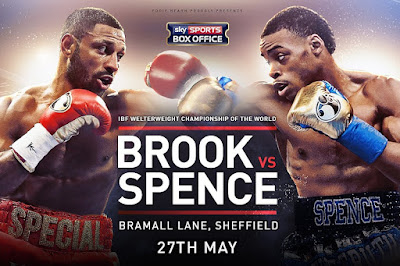 Lots of things to catch up on here at TRS with trips to Norfolk,Lexington and my 30th anniversary tour stops,but I'll be catching up on those as the week goes on.

First,we have a bout that boxing fans have been salivating over from the time that it was announced as Kell Brook defends his IBF welterweight title against undefeated Errol Spence.
Brook's win over Shawn Porter was far more impressive than Keith Thurman's over the same Porter,has had troubles getting top welterweights to fight him-much in the same fashion as Gennady Golovkin has at middleweight,while the talented Spence has outclassed his own limited competition put in front of him by the PBC and is untested against top opponents.
Brook showed he'll fight anyone by his challenge of Golovkin,but we'll see what that bout took out of him after Golovkin broke his eye socket,but Spence has been off since August and his knockout of Leonard Bungu,who will not bring back memories of Jose Napoles by any means.
I've been back and forth on who I think wins this and this is a true fight that can go either way.
The fight is on Showtime around five in the afternoon-I'll be in Frederick for the Keys and Buies Creek Astros,so I'll be watching on a delay.

The undercard sees the WBA filling its super middleweight title vacancy with former champion Fedor Chudinov,who lost his belt via controversial decision to Felix Sturm,who then failed his post fight drug test against George Groves,who despite his talent has lost three title challenges.
If Groves wins,the UK could see a big money fight there with Groves unifying his WBA title with James DeGale and his IBF title.
Groves decisioned DeGale in 2011 for the only loss in DeGale's career.