Cavaliers cruise by Celtics in Game One 117-104 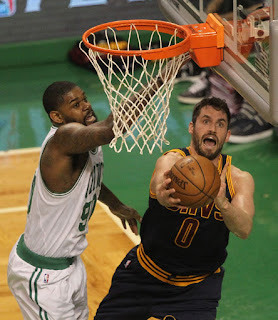 in a game one that spent much of the game in the twenty point margin.
LeBron James led Cleveland with 38 points,but he had plenty of help with Kevin Love scoring 32 points and 12 rebounds along with Tristan Thompson's 20 points and 9 rebounds.
The 117-104 win gave Cleveland a 1-0 series lead and gave home court advantage to the Cavaliers.
Game two is Friday night in Boston.

1) I'm not sure what Boston coach Brad Stevens can do in any hope to stop LeBron James.
Stevens (who I'm a big fan of as a coach) tried big,small and in between defenders and none created even the slightest concern for James,who drove by everyone,but Red Auerbach to the basket for easy scores.

2) Boston's best two players were not their best players on this night as Isaiah Thomas and Al Horford combined to shoot 11 for 30 on the evening.
In my opinion,Thomas and Horford are nice players and well suited to win games in the regular season.
However,there always comes a time somewhere in the postseason that teams need to have an Alpha Dog-neither Thomas or Horford are that type of player.

3) Was nice to see Kevin Love setting a playoff career high for points with his 32 points.
Love hit six of nine from three point range and many of them were wide open shots.
The Cavaliers moved the ball around with ease,often leaving the Celtics scrambling and more often than not,unable to reach the open man.
I drove to work late in the third quarter and Sirius radio uses the home team feed,so the Celtics announcers were on and they were bemoaning the lack of defense on Love from beyond the arc.
When the home team's network is griping about their teams lack of defense,you know they have been dominated.

4) Credit to Tristan Thompson for not only his 20 points around the glass,but for establishing that the Cavaliers will be the more physical team inside.
Boston is one of the worst rebounding teams in the league and Cleveland figured to have an advantage inside,but Thompson's offense was unexpected,I'll take it.

5) Kelly Olynyk,the Celtic hero in their game seven win over Washington and before that best known for his MMA submission move on Kevin Love in the 2015 playoffs that knocked Love out for the duration of that playoff run,was completely ineffective.
Ineffective to the tune of two points in sixteen minutes.

6) Game two might be the Celtics stand.
At home and with most counting them out,Boston will need their best effort and I think Cleveland is going to get it.
Boston is in "all in" mode-if the Cavaliers can grab game two,I think this series ends in a sweep...