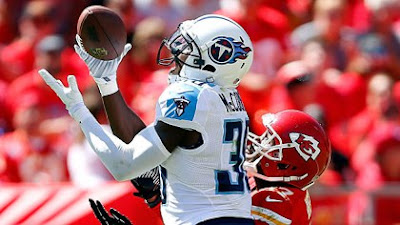 The already unproven secondary of the Cleveland Browns took a huge hit with the loss of fourth round draft pick Howard Wilson to a broken kneecap in rookie mini-camp,but the Browns quickly attempted to minimize the damage with the signing of free agent Jason McCourty to a two year deal.
No terms are available at this time.

McCourty played eight years for Tennessee after being a 2009 sixth rounder for the Titans and will likely either compete for the cornerback slot against Jamar Taylor opposite Joe Haden,but could move to safety with Jabril Peppers as the safety pairing.
McCourty turns 30 in October and is noted by fantasy football fans as being an excellent tackler for a cornerback.
McCourty has intercepted 13 passes in his career and with the exception of 2015,has been a durable player that keeps himself in the lineup.
McCourty is better known as a corner,but he has the type of speed and athletic ability to make a conversion to safety go pretty smoothly and the Browns might have a larger need at safety with the current setup than at corner,although they are far from deep there as well.

Give the Browns credit,after the loss of a player that I projected as being at least the third corner as a rookie in Howard Wilson,Sashi Brown and company struck with speed in signing the best free agent defensive back available.
Good work by the Browns in not waiting around,now about another wide receiver....

Back later with something more.