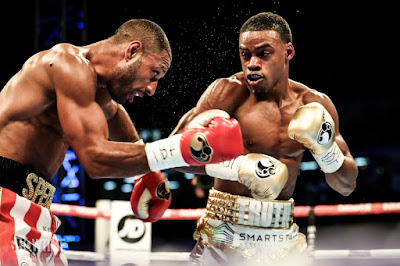 The Boxing Challenge returned with a bout that boxing junkies had hungered for a long time and were rewarded with a back and forth thriller that ended with Errol Spence taking the IBF welterweight belt away from Kell Brook with an eleventh round stoppage.
The bout featured plenty of action with both fighters having more than a few moments, but Spence knocked Brook down in the tenth and Brook dropped to a knee in the eleventh surrendering honorably.
Spence also broke the eye socket of Brook in the middle rounds as he re-injured the socket that Gennady Golovkin broke in Brook's last bout, along with badly puffing the left eye of Brook up with swelling.
I had Spence leading at the time of the stoppage 96-93 (6-4 with an extra point deducted from Brook for the tenth round knockdown).
It was just the type of fight that fans hoped for and with the Spence victory, Premiere Boxing Champions may have found the star that they have lacked since opening their promotion.
PBC has hyped several fighters and hoped those fighters (Keith Thurman, Adrien Broner, etc) would develop into the flagbearer for their company, but for various reasons fell short.
Errol Spence has the type of skills and personality to be such a star-let's hope that PBC can avoid the inactivity pitfalls and allow fans to see him active to build his fanbase, which will allow him to develop into a star.
As for Kell Brook, it appears that he has developed a chronic problem with his facial bones and is going to have problems in tough fights as his face is going to bust up.
Issues like that don't get better over time and Brook is going to have to deal with these problems for the rest of his career.
Ramon Malpica earned two points in the boxing challenge for the Spence knockout, while I picked up one for the Spence victory.

I got that point back when George Groves won the vacant WBA super-middleweight title with a sixth-round stoppage over Fedor Chudinov in another great fight loaded with action.
I had Groves slightly ahead after five rounds (3-2) but wobbled Chudinov badly in the sixth before the referee stopped the bout.
Groves could have two big-money unification bouts that would draw huge crowds (and dollars) in the U.K. with IBF champ James DeGale (Groves handed him his only loss) and if Callum Smith could defeat Andre Dirrell for the vacant WBC title, either could be in Groves' future.
I picked Groves for one point with Ramon picking Chudinov.

As of now, I don't have a result for the final bout for this week from Panama with Anselmo Moreno against Julio Ceja.
I'll add that to this post when I have the result.
Editor's Note Ceja stopped Moreno in three rounds, giving Ramon two points and my zero.
I lead the challenge as of now 70-66