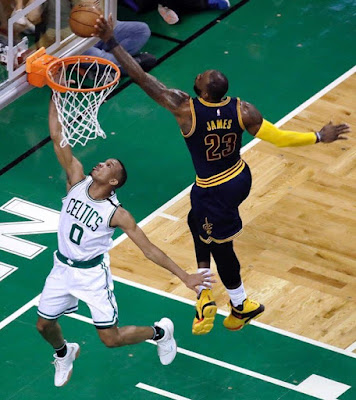 The Cleveland Cavaliers ran over the Boston Celtics in a way that hasn't been seen since,well ever in game two of the Eastern Conference finals in a history making 130-86 destruction in Boston.
LeBron James led Cleveland with 30 points with Kyrie Irving and Kevin Love each adding 23 and 21 respectively in support.

The Cavaliers now lead 2-0 and will attempt to end the series with the next two games in Cleveland...

1) Wow! Not sure what I can add to a win like that,so here are some numbers.
Cleveland led Boston by 14 after one quarter,41 at the half (playoff record) and 46 after three..

3) Loved the off balance shot by JR Smith to end the half and set the record for halftime lead.
When stuff like that goes in-it's your night.

4) Cleveland's top lead was 50 in the second half for a number hard to comprehend..

5) LeBron James was not invited to New York for the league's MVP ceremony,which means he wasn't in the top three of the voting.
Wow...

6) Not much I can add about this other than it seems the rubber match between the Cavaliers and Warriors appears to be a done deal.
I'd wager the series will bring ABC/ESPN record ratings for any NBA Finals ever...