Cleaning out the inbox 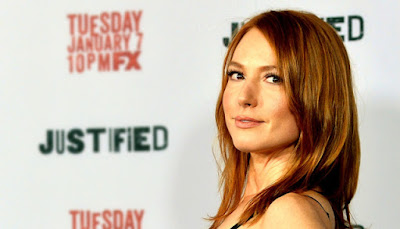 Time for a cleaning of the inbox,which is more than overdue.
Mostly a non-sports cleaning this time,so lets get started.

The picture on the right is actress Alicia Witt,who has guest starred on several series (I first saw her on Justified-a great and missed show) and does a lot of those Hallmark/Lifetime style movies.
Witt is also a singer and I found her interview with Forbes to be fascinating as she discusses just how Hollywood works (and shortchanges) its guest stars on television shows,an upcoming album that she funded through Kickstarter and why even recognizable actors aren't nearly as rich as one would think.
Witt is honest enough to say that she makes more than enough to support herself,but she is far from wealthy.
I thought it was an very enlightening interview and learned a few things about the entertainment world...

I've written before about my Buffy the Vampire Slayer fandom and I saw an link on my Facebook timeline about a recent interview with Buffy star Sarah Michelle Gellar on her new food venture-
Foodstirs.
Gellar discusses her most recent series (The Crazy Ones with the late Robin Williams,Foodstirs and the various difficulties of a startup business,no matter how famous you may be..

I've written before about FS1's Katie Nolan and her willingness to take anyone on,but this one is gutsy as she takes on a titan of her own media company in Sean Hannity.
Nolan fired off some tweets against Hannity that showed not only no fear of Hannity,but of her own company.
I'll let you read just what she said (Language),but it will be interesting to see if Nolan gets any payback-publicly or privately...

CSN Washington is moving former Bullets (yes,I said Bullets) guard and longtime color commentator Phil Chenier out of the game analyst role after being the only analyst in the history of the network.
No word on a replacement for the veteran,who was always a favorite of mine.
My all-time favorite Phil Chenier story: The Bullets used to have a half hour pregame show from the old Capital Centre- the Bullet Report,which consisted mainly of Chenier sitting in a chair answering viewers phone calls on the team.
Ryan and I were watching the Bullet report and this guy calls in for this.
Chenier:Let's go to Insert Name Here,you're on the Bullet Report.
Caller: Yo,Phil-tell me why the Bullets Succcckk.
Chenier looked like he had no idea what to say and sheepishly moved to the next caller...
Ryan and I laugh about that to this day!

When I was on my trip to Charleston,I saw this link on CNN for a recall for hash browns and other potato products for one of the crazier recalls that I have seen in quite a while.
The recall of products from McCain (no,not as in Battlin' Bob) products for "possible extraneous Golf Ball materials" makes me really think.
Is McCain growing golf balls in their patches? Are they near a golf course and if so imagine the amount of wayward drives that had to have been hit to have that many "materials" in their bags of potatoes?
That's one crazy recall and I'm just having real problems stifling laughter from just how on earth all of this "golf ball material" found their way there!!

MPT finishes us for this cleaning session with a discovery of something that might go a long way toward an eventual cure for the flu.
A recently discovered frog has a slime that has a molecule that can eliminate viruses and yet leave the basic cell intact.
Many tests to be done in the future and researchers are unsure how this works,but it certainly is a positive development to be part of the future process of creating cures...

Been looking at the stats and readership is rising,hope some of the new readers stick around for a while.
I'm caught up for now and I didn't even mention the Cavaliers two dominant wins over Toronto.
Thinking about either a Forgotten Superstar for tonight or a thought or two on the health care bill/debate of today,so hope to see you there...