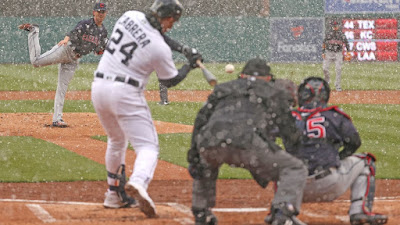 I wrote yesterday about Opening Day and what was taking the joy away from baseball from me, so I decided to spend the day watching the Indians in the afternoon in Detroit against the Tigers in the snow and then the Giants from the road office with their opener in Seattle in an (ahem) interleague matchup.
The avenues may have been different, but the destination ended in the same manner for each team= an L.
And the worst part? Both teams' losses may have played out as many eventual defeats could as the season moves by.
In Detroit, a day filled with snow showers along with lots of wind, saw the Tigers drop the Indians 3-2, but the game played out as many could for the Wahoo's-they fell behind and didn't have the offense to catch up.
Shane Bieber struck out twelve Tigers in six innings and allowed only five hits, but the game was decided in the first inning when Miguel Cabrera drove a Bieber serve to the opposite field through the falling snowflakes and barely over the right-field wall for a two-run homer.
The snow shower caused visibility that was bad enough that Cabrera didn't know the ball carried into the seats and slid into second base.
Cabrera, who is attempting to reach career goals of 500 homers and 3,000 hits, both of which are likely should he stay healthy this season, looks to have lost twenty pounds and looks in better shape than he has been in recent years.
The Indians would not score until a two-run homer by Roberto Perez with one out in the ninth inning cut the lead to 3-2, but Cleveland would score no more.
This game was exactly what I (and every Cleveland fan likely) worried about entering the season- receiving a good pitching performance and not being able to stay in the game due to a weak offense.
Three runs allowed is respectable, but it could reach the point that the staff cannot allow more than two to have a chance to win and that is called a very narrow needle to thread.
One thing that I did notice about this game was from myself.
I noticed that I was counting a large number of Tigers that I had met/seen as they moved through the minors and the number of them that hadn't started in the Detroit system.
Of the nine starting position players (Including the DH, but not starting pitcher Matthew Boyd), I had met/seen eight of them (only Miguel Cabrera missed the cut) and of the eight, only one had been with the Tigers when I saw him, (Shortstop Willy Castro with AA Erie after he had been acquired from Cleveland that year).
It'll be interesting to see how many players that I can count this season under that scenario because as each season goes by, those numbers are going to dwindle.
Nine hours after the start in Detroit, the San Francisco Giants started their season in Seattle.

I would imagine that there are few readers here that don't know how much I dislike interleague play, so it was an extra sting that the Giants started their season not only in interleague but on the road as well.

The Farhan Zaidi-led Giants have been frustrating, not because they are rebuilding, but due to the revolving door of players that can make it hard to follow and enjoy the team.

I don't have a problem with trying to find a gold nugget from a prospect pool with players that might need a break, and it worked out very well with Mike Yastremzski and to a lesser extent with Alex Dickerson.

However, the batting average is never going to be great and how could it be, if they didn't have questions the player wouldn't be available, still it doesn't make it easy.

The Giants jumped out early with a second-inning two-run shot from the returning Buster Posey, would add another homer from Austin Slater in the fifth to build a 5-0 lead after six innings and a 5-1 advantage after seven to combine with a terrific start from Kevin Gausman, who allowed only two hits and a seventh-inning run to seem to be cruising to a win.

And then, the wheels came flying off.

Gausman was replaced for one out by Caleb Baragar to finish the seventh and so far so good.

That worked, but Gausman had thrown ninety pitches and while the "analytics" swear by their pitch counts, I'm a believer that if a guy is pitching well then ride the horse.

I'm not saying throw 180 pitches and I can give a pass on this one because it was the opener, but it sure seemed like Gausman had another inning in him.

Matt Wisler starts the eighth, doesn't retire a batter on two hits and a walk, and leaves the bases loaded for Jarlin Garcia, who manages to strike out one, but walks in two runs.

Here comes Tyler Rogers and he does get the two outs to finish the inning- after allowing the Mariners to wind up with a 7-6 lead after a double, a hit batsman, and a fielders choice on a Jose Marmelejos (Former Hagerstown Suns) grounder to Brandon Belt that could have ended the inning with a double play, but Belt's throw to Brandon Crawford was low and away from the bag to allow the leading run to score rather than an inning-ending twin killing.

Rogers would retire the next two batters, but a five-run lead had melted into a one-run deficit in one Seattle at-bat.

Dickerson takes Romero downtown and suddenly as I watch this game, Fred Landucci informs me that MLB is using the runner starts on second in the extra-inning rule that was used in the exhibition that was 2020's season.

I didn't know that they had kept that silliness, but apparently when the players refused a certain offer for the season, the league was allowed to make certain decisions and some genius decided to stick with this mess.

As I rooted to avoid the tenth, the next three Giants were retired, new Giant closer Jake McGee did the same to the Mariners and here we go.

You can cut the tension with a paper-knife as Evan Longoria trots to second for this farce, but does not score after two ground outs and a Buster Posey flyout.

The new pitcher for the Giants is Jose Alvarez and it's Seattle rookie Taylor Trammell starting at second as Alvarez tries to work through this fake crisis.

And the thrilling conclusion?

A Giants loss and an excellent outing from Kevin Gausman wasted for nothing.

It was fun to watch baseball again, but I have a feeling that this is going to be a frustrating season with both of these teams for two very different reasons.