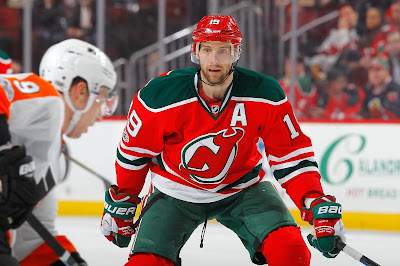 I haven't watched as many New Jersey Devils games of late, mainly because of the period of time when it seemed like the Devils played and lost to the Washington Capitals every game (I'm not exaggerating, the Capitals and Devils played eight times this season and Washington has won all eight) and let alone the pain of being forced to watch on the Capitals network with the worst commentating team in hockey.

Still, I've been paying attention and the struggling team was certainly going to be a seller at the upcoming trade deadline.

Tom Fitzgerald moved early and traded the team'ss top asset as New Jersey traded Kyle Palmieri and Travis Zajac to the nearby New York Islanders for a package that included the Islanders' first-round draft choice in this year's draft.

Both Palmieri and Zajac will be free agents at the end of the season and both are thought to be willing to consider a return to the Devils with Palmieri's agent having talks with the Devils for the week previous to the trade as the two attempted to come to an agreement on a contract extension.

Zajac waived his no-trade clause to make the deal, likely because of the location and his past with the Islanders GM Lou Lamoriello and the Devils are possibly considering an attempt to work on a contract with him as a free agent as well.

The thirty-year-old Palmieri had sat out the past two games to keep him healthy for a possible trade but had seemed a bit down this season with eight goals and nine assists in thirty-four games with only one goal on the power play.

Palmieri has been one of the league's better power play scorers over the recent seasons as a Devil, so the Islanders are hoping that he returns to that form in blue and orange.

Zajac turns 36 next month and his long(eight-year) contract that he was signed to by Lou Lamoriello (two teams ago for Lou) finally ends at the end of next season.

I've thought the contract was an overpay ( in length), but Zajac's effort and leadership have never been in question, and it's sad to see him in another uniform.

Zajac has seven goals and eleven assists this season for New Jersey in thirty-three games for the Devils, but I'm not sure that Zajac will be more than a penalty killer or a situational player for the Islanders.

Still, he is a leader, might help on faceoffs a little, and for an Islander team that is going all-in for the second consecutive season (the Islanders have now traded their first-rounder at the last two trade deadlines)

The first-rounder is the centerpiece of the Devils' return as the Devils also received a conditional fourth-rounder to be decided by the Islanders for either the 2022 or 2023 draft and minor league forwards Mason Jobst and A.J. Greer.

The pick will become a third-rounder if the Islanders reach the Stanley Cup Finals, which gives Devils fans a conflicted decision for rooting for the Islanders in the playoffs.

The faster they go out, the higher the first-rounder will be, while the longer they last the better the chances that the fourth-rounder becomes a third.

Neither of the two players acquired should be considered prospects and are more than likely players to make the trade work that could help Binghamton.

At 27, Jobst has never played a minute in the NHL, and after a college career at Ohio State, Jobst scored five goals in 44 games for AHL Bridgeport last season and hasn't scored in seven games for the Flying Tigers this season.

The 24-year-old Greer scored one goal in thirty-seven games spread out over three seasons with Colorado but has spent the last two seasons in the AHL with Colorado, and this season with Bridgeport, Greer has scored a goal and an assist in ten games.

The former second-rounder seems the better bet to have a chance to stick around and maybe has a chance for promotion this season if the Devils make further trades, but I wouldn't count on him to be more than AHL filler or an occasional injury callup.

Not for trading Palmieri and/or Zajac, I'm OK with that with impending free agency.

I'm not sure Zajac may not retire after the playoffs, and if he does play next season the Devils along with the Islanders and hometown Winnipeg Jets are likely the only teams that he might return to play for.

And a first-rounder is more than many expected to bring back for Palmieri.

However, that first-rounder is going to be near the back of the first round at worst, and in the low twenties at best, and the players involved have a better chance at being out of the organization by next season than they do as contributors to the Devils.

In the end, the Devils winning this trade will come down to how they use the Islanders first-rounder and that answer is several years down the road.