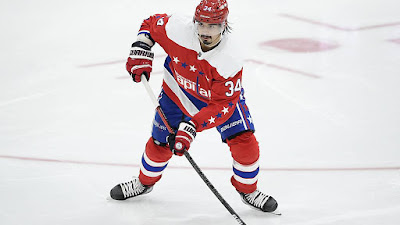 I'm not sure what I'm watching tonight with the New Jersey Devils hosting Pittsburgh and the Cleveland Cavaliers in New Orleans to face the Pelicans and both games starting at the same time.

And even so, it is Masters Sunday, so the Masters could play a part in what I decide to watch, but the Devils have made another trade as they traded the third-round draft pick that they obtained from Arizona in the Taylor Hall trade last season to Washington for defenseman Jonas Siegenthaler.

The trade seems to fit both teams' needs for the upcoming expansion draft for the Seattle Kraken.

Washington had too many defensemen of quality and couldn't protect them all, while New Jersey needed a defenseman worth keeping along with Damon Severson with Ty Smith's lack of experience keeping the team from being forced to use a spot on him.

Adding Siegenthaler allows New Jersey to expose either Will Butcher or P.K. Subban to the Kraken and hope that Seattle selects either the out of favor Butcher or the overpaid Subban to loosen even more salary for a team that is in good shape already as far as cap space.

As for Jonas Siegenthaler, he has been scratched in 30 of Washington's most recent 31 games, but as mentioned, Washington is very deep on their defensive roster.

Siegenthaler didn't score a point in the seven games that he did play this season and in the 2019-20 season, Siegenthaler scored two goals with seven assists in 64 games for Washington.

Siegenthaler is reported to be a good skater and a defense-first blueliner that could develop into a solid second-pairing defenseman.

The 2015 second-round pick hails from Switzerland and is a former national teammate of Nico Hischier on the Swiss junior world team, so there is some familiarity there.

Siegenthaler is only 23 and will be a restricted free agent after the season, but New Jersey didn't trade for him to allow him to walk away...

Meanwhile, I missed this note from earlier in the week as the Devils waived/terminated winger Nikita Gusev and allowed him to search for a new team, which Gusev found in the Florida Panthers.

Gusev arrived in New Jersey with a large amount of fanfare after dominating the KHL and the Devils traded a second-round pick to Las Vegas to gain his rights with the team signing him shortly thereafter.

At times in 2019-20, Gusev looked like a player capable of spectacular things and finished with 13 goals and 31 assists in 66 games, but never seemed to connect with Lindy Ruff and his style of play and was only active for twenty games this season, finishing with two goals and three assists.

In the end, a player with Gusev's defensive deficiencies had better be able to finish around the net and he simply didn't do that enough to be worth his playing time.

Gusev may succeed in Florida, as it seemed to me to be more of a fit within the Lindy Ruff system than a lack of talent or even hustle.

Vatanen was re-signed by the Devils as a free agent, but arrived late due to Covid-19 passport problems and played in only 29 games, scoring two goals with three assists.