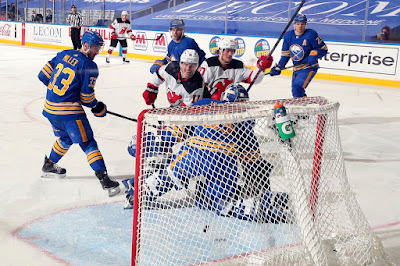 Jesper Boqvist scored his first goal of the season to finish the New Jersey scoring recap.

Aaron Dell finished with 24 saves in an unexpected start to grab his first win as a Devil.

New Jersey will play Pittsburgh Friday, unsure what I'll be watching then for recaps...

1) I wonder if someone didn't see Aaron Dell tonight and consider trading for him as playoff depth in the net?

Dell did allow three goals, but all three were on rebounds and he hasn't played in over a month, so he was acceptable to me, but this could have been a showcase game for an interested team.

3) This is shorter than usual due to time constraints, but you had to enjoy the game by the Jack Hughes line.

Hughes at his core is a pass-first center and the key to his growth will be to have finishers on each side of him.

Perhaps the Devils are onto something...