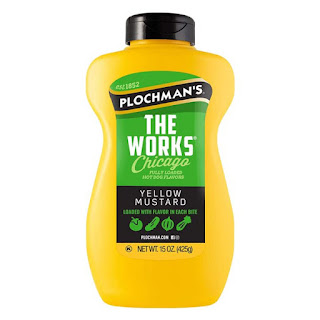 I had a bunch of random thoughts on my mind and decided to incorporate them into the blog.

I am hoping to make this a regular feature, so I am looking for a name for this- drop me a line through whatever avenue that you read this and if I select something that I like, I'll try to scrape up a prize of some type for the winner...

1) As an avowed mustard lover and one that usually has several in the fridge such as Cleveland's Bertman's, Harrisburg's Miller's, and others that look interesting in the store- a new contender has emerged- Plochman's "The Works".

The Works says it's a Chicago-style mustard with relish already in it and it is definitely a must (pun-intended) for those of you that like relish and/or dill pickles.

The lovely Cherie also swears by this one, and the only one of the local supermarkets that carry it is Weis Markets, so give the Works a try, should you see it available.

2) I try to watch fewer political programs of late mainly because I feel that so few are where I'm at politically and that few are able to play anything other than a game of "What About"?

Is it possible that maybe just maybe, one can believe that wrong is wrong for ills from either side of the fence and not make it only about ideological "friends and enemies"?

3) I suppose this is why I do like the Bulwark because it seems the closest to what I believe.

I'm maybe slightly to their left socially and pretty even up fiscally, but they are closest to my feeling of you can say the Andrew Cuomo's are awful as well as disliking the former president and not be wrong.

4) One final political note- I've also cut back my political podcast listening for a bit and why I haven't added any pay products of late, but I always stop and listen when Amanda Carpenter makes a podcast appearance (Or her CNN spots, but I've got that cut back as well).

I'm a big fan of her writing and I promise (on the word of my financial backer Fred Landucci! Ha Ha!) if the podcast returns, I'll take a shot at trying to get her to do it!

Matt Rhule and Joe Brady might have luck with Darnold that the Jets never had, but Darnold should have no excuses this time if his career doesn't progress.

6) One thing that I've missed from Covid-19 is a good Chinese food buffet.

Insurance will likely be higher and would-be owners will be more reluctant to open an already difficult business to start up.

8) For as much as I love the internet, the information at your fingertips, and all that you can read, it's sad that a generation will go by to not know the excitement of seeing a new sports magazine or comic book in a grocery store or pharmacy and have it be a complete surprise.

Looking for the latest boxing magazine, Street and Smith's sports preview, issue of Green Lantern, or a pack of Topps at a Sheetz or 7-11 was a thrill for a kid that loved to collect and read, and losing that is an underrated factor in why kids are losing interest in so many things that kids loved in previous eras.

9) The mail still is the main avenue that this country uses for getting packages and their needs.

No matter what the internet has improved on billing and purchasing, there still is a need to move those items from the start to your home or business.

The USPS has flaws, but they have been bloated out of control since Louis DeJoy was installed to "fix" it- His latest idea is to charge more, slow their service, and have fewer open hours for the various offices around the country.

The answer is plain- this is not how normal businesses are "fixed".

It's time for him to go.

10) If I could change one thing to streamline healthcare, it would be to make a universal insurance/payment card that all companies would need to provide.

A friend's wife works at a local doctor's office and she reports that is the biggest hassle with multiple companies doing their cards in different formats, making them harder to decipher, slowing the process down, which can result in mistakes to squeeze between the cracks.

Is it asking too much for one format?

Hope you like this post, I haven't felt like writing about baseball with the Indians' gumball-like bats of late, so thought I would do something different.

Back later, with a turkey in the backyard and I was glad Fred Landucci wasn't driving in the area at the time!