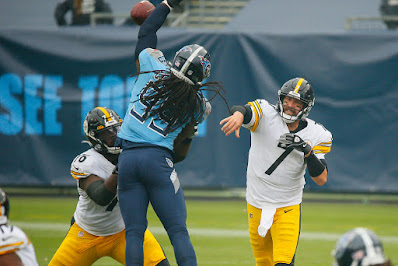 Andrew Berry finally got his man after two off-seasons of trying as the Cleveland Browns signed defensive end Jadeveon Clowney to a one-year contract worth eight million dollars for 2021.

Clowney may make an extra two million dollars, should he hit certain unannounced incentives during the 2021 season.

The top overall pick in 2014 by Houston. Clowney was traded to Seattle during the 2019 season and then signed with Tennessee before last season.

Clowney played in only eight games for the Titans, due to injury, and did not record a sack, but is entering a situation in Cleveland that is similar to his situation in Houston where he lined up opposite a dominant pass rusher (J.J. Watt to Myles Garrett) that was being double-teamed on every play.

Clowney thrived as the secondary rushing threat, finished with nine sacks twice, and made the Pro Bowl from 2016-18 with the Texans.

Clowney was drafted as and still holds a reputation as an elite pass rusher, but at 28 years of age Clowney has never finished with more than nine and a half sacks in a season.

What Clowney does bring besides the reputation is the ability to rush the passer into getting rid of the ball quicker or an unofficial "hurry".

Causing "hurries" can often be just as important as a sack as a desperate passer throws the ball to get the ball out and oftentimes results in an errant pass that can be incomplete or even better-intercepted.

Clowney is also underrated against the run and he may be more of a sure thing as a run defender than a pass rusher at this stage of his career.

In fact, if it wasn't for the concerns in keeping Clowney healthy, he could be a three-down end and not hurt you at all

The signing of Clowney also may change how the Browns use their first-round pick as it was possible that Cleveland would have been looking for defensive end help.

Now, I think the Browns are more likely to look for a cornerback unless someone falls to 26 that is unforeseen,

While Jadeveon Clowney has the big name and comes at a reasonable price (even if Clowney hits every incentive, he'll make less than the Browns paid Olivier Vernon last season), it could have one other consequence- the possible loss of Sheldon Richardson.

Richardson is scheduled to make over thirteen million this season and the signing of Clowney may force the Browns to either restructure Richardson's contract or possibly even release him.

Frankly, considering Richardson's level of play for the Browns and given the choice between an injury-plagued defensive end and a durable defensive tackle, I might choose Richardson.