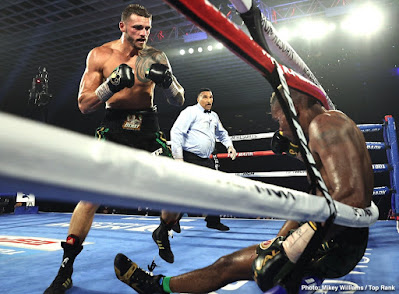 The boxing challenge will be on three networks with the most important two events dueling with the wonderful counter-programming that make following boxing so "wonderful".

ESPN leads us off with the filling of the long-vacant WBO light heavyweight title with Joe Smith facing Maxim Vlasov for the title vacated shortly after Canelo Alvarez gave it up after defeating Sergey Kovalev in December 2019!

Various cancellations, delays, and the WBO insisting on a four-man tournament have resulted in a championship without a champion for well over a year.

Smith knocked former champion Elieder Alvarez through the ropes and out in nine rounds to enter the finals and with a then-surprising win over Jesse Hart before that, Smith was one of the few to have a good 2021.

Vlasov dropped down to light heavyweight after a loss to Krysztof Glowacki and has won three straight and when his semi-final opponent had health issues, was sent straight to the finals against Smith.

Vlasov has split two fights with former contender Issac Chilemba but has lost both of his other notable fights losing almost every round to Gilberto Ramirez and to Glowacki.

The winner (expected to be Smith) will likely unify their newly won title with the WBC and IBF titles held by Artur Beterbiev later this year.

Ennis faces former IBF junior welterweight champion Sergey Lipinets, who is best remembered for his losing effort against Mikey Garcia and his stoppage over Lamont Peterson, but struggled to a draw last time out against little-known Custino Clayton.

Lipinets is the best opponent that Ennis has faced, but I have a feeling that he is going to be tailor-made for Ennis to look spectacular against.

It is very possible that the best fight to be made in the welterweight division may not be Errol Spence vs Terence Crawford- it could be Jaron Ennis vs Vergil Ortiz.

Stanionis looked strong in his last fight against Janer Gonzalez in December, but Dulorme is a step up in competition from his previous victims.

Dulorme is a gatekeeper that loses to the top fighters (Terence Crawford, Yordenis Ugas, and Jamal James), but was good enough to draw with Jessie Vargas and if you aren't top ten level, Dulorme can beat you.

The opener is the return of IBF junior bantamweight champion Jerwin Ancajas in a delayed mandatory defense against Jonathan Rodriguez.

Ancajas was the odd man out in the 115-pound division when he was with Top Rank and he may be in the same situation with PBC, but perhaps a unification fight against WBO champion Kazuto Ioka could be in the works with a victory over Rodriguez, who may be yet another of a recent parade of bad IBF mandatory challengers.

Benn, the son of former super middleweight champion Nigel Benn, won his last fight with an easy unanimous decision win over Sebastian Formella and Vargas has lost to former champions Danny Garcia, Amir Khan, and Errol Spence with a loss in his last fight to Vergil Ortiz, so a win over Vargas would likely move Benn to bigger things in the division.

Considering Ortiz took seven rounds to stop Vargas, an impressive win could move Benn to the verge of the top ten in the division.

In the Boxing Challenge, I lead Ramon Malpica 38-36.