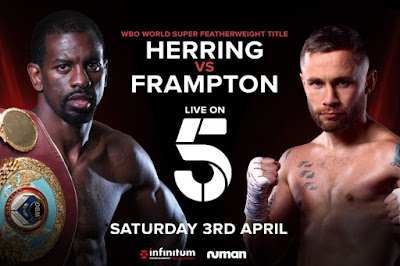 The boxing challenge will have two title fights on two platforms and both are outside of North America in locations that rarely will feature world championship boxing.

ESPN+ and Top Rank will broadcast a world championship pairing from the United Arab Emirates, which is essentially a "loser leaves town" crossroads battle with the winner defending the WBO junior lightweight title against maturing superstar Shakur Stevenson for a sizable paycheck and the loser perhaps considering retirement.

Champion Jamel Herring kept his title by disqualification when Jonathan Oquendo continued to smash his head into Herring's all throughout the bout and was finally disqualified in the eighth round when Herring's cut was ruled too bad to continue.

The ending was deserved, but Herring seemed a bit relieved at the fight's ending as, despite Herring being far ahead on the cards, Oquendo was beginning a rally that likely would have fallen short, Herring avoided a rough final few rounds by the ending.

Carl Frampton has won his last two fights since losing a decision to featherweight champion (at the time) Josh Warrington and could be hitting his highest weight wall at 130 pounds after winning championships at 122 and 126 pounds.

Herring's a boxer that is good enough to win a title but isn't quite elite, while Frampton was elite at lower weights when he fought up to his nickname "The Jackal", but hasn't been quite to that level since his decision win over Nonito Donaire.

If that version of Frampton enters the ring, I think Frampton breaks Herring down to win a lopsided decision, but if not, Herring outboxes Frampton on his way to a close but clear decision.

Meanwhile, over on DAZN from Tashkent, Uzbekistan, WBA, and IBF junior featherweight titleist M.J. Akhmadaliev will defend the pair of belts for the first time against Ryosuke Iwasa of Japan.

Akhmadaliev won a split decision over Danny Roman last January in a terrific fight and looks to be on his way to bigger things, should he dispose of mandatory challenger Iwasa, who once held the IBF championship in 2017-18 and defended it once before losing it to T.J. Doheny by a controversial decision.

Iwasa could give Akhmadaliev some trouble, but I think the naturally bigger Akhmadaliev will hurt Iwasa in the middle rounds and has a chance for a late-round stoppage.

Akhmadaliev could have future defenses from the WBA against PBC fighters and minor WBA champions Brandon Figueroa and Ronny Rios or another PBC fighter in number one contender Raeese Aleem, but the question is that why Danny Roman isn't higher in line considering the closeness of his loss to Akhmadaliev.

I scored that fight a draw and Roman deserves a rematch before anyone gets further consideration.

The card starts at 10 AM EST on Saturday

In the boxing challenge, I lead Ramon Malpica 36-34.