Boxing Challenge: Benn stops Vargas in one, but Bridges hangs the star 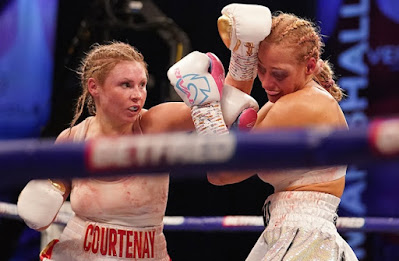 Vargas has never been a top welterweight and failed against the top fighters that he has faced such as Errol Spence, Amir Khan and in his latest fight, Vergil Ortiz, but he was still the toughest test that Benn had faced,

Still, the less I say about this one the better as a few combinations knocked Vargas into the ropes (which could have been ruled a knockdown), a few punches landed before a strong uppercut and the referee ended the fight after less than a minute and a half.

It's an impressive win for Benn, the son of former super middleweight champion Nigel Benn, but the early stoppage does take a bit of the shine off the win.

Ramon Malpica and I each earned one point in the boxing challenge for the Benn victory, but the bigger story for me was the undercard and a women's division fight that not only had interesting buildup, but backed it up in the ring.

Not because I dislike women's sports really, I just haven't had a reason to care.

The fighters haven't had personalities that grabbed you in a way that wanted to make you root for them or for them to be defeated, and the biggest problem has been the lack of explosive punchers that give fans such excitement.

The best in the sport haven't done either- as the top two pound for pound fighters have stopped few opponents (Katie Taylor 6 of 17 and Claressa Shields 2 of 11) and other than Amanda Serrano ( 29 of 40), none of the other top fighters have many stoppage wins either.

The personality issue has been an issue that is just as difficult to tackle as other than an occasional Shields twitter rant, the sport has been more Bob Backlund than Hulk Hogan in promotion and it has shown in interest.

And then two fighters grabbed my attention and made me want to watch.

DAZN places about every possible event to an upcoming card of theirs on their service and they began dropping a few videos on a fight between England's Shannon Courtenay and late replacement Ebanie Bridges of Australia.

Many of the media, far more knowledgable than I on female boxing, criticized Bridges qualifications (5-0, but against very limited competition) for a title fight (the vacant WBA bantamweight title) and dismissed her as a pretty face that was doomed for failure against the better-known Courtenay.

Since I had never heard of Bridges, it was easy to push another fight to not watch on a day scheduled to be boxing loaded aside.

However, then the press conference and the DAZN faceoff (think of how HBO used to put two fighters together across a table and let them go) really made me interested in the pairing.

Bridges was charming, yet with a wink that showed she's in on the gag of boxing promotion and with the ability to not take herself seriously, the 34 year old math teacher had the looks and mouth to sell a fight, but what would happen in the ring?

After all, it's one thing to hook someone into watching, it's another to keep them there with the skills in the ring, so I wasn't really sure what to expect from Bridges (or Courtenay for that matter) and whether this would be a real fight or something similar to the Mia St.John sideshows years ago.

And when the bell rang?

We got a great fight, the best fight of the day, and while Jaron Ennis's knockout of Sergey Lipinets (Post later today) was the performance of the day, it was Ebanie Bridges that stole this Saturday for me.

Bridges moved, threw punches that were meant to hurt rather than only score points, never stopped chugging forward, and survived a ninth round that would have finished many fighters (male or female) and battled through a swollen shut left eye that I've seen more heralded fighters with far stronger resumes surrender through a lesser eye injury through ten rounds.

I scored the fight 5-5 and a draw, so Courtenay winning a close decision wouldn't have been a robbery had the judges scored it 6-4 as one judge did.

But in typical boxing fashion, the other two judges had ridiculous 8-2 scorecards and showed again that a fighter on the road better dominate or they aren't getting the nod.

In the end, this fight wasn't about one of a thousand title belts or even another questionable scorecard that boxing never seems to deal with.

After all, bad scorecards are howled about for the evening or even the week, and then we move onto the next week and the next awful judging exhibition.

Peel back the easy superficial take with Ebanie Bridges and look deeper than the looks and image, she has the heart that champions possess- watch rounds nine and ten with her left eye that reminded me of the famous photo of Carmen Basilio's eye after his second fight with Sugar Ray Robinson, and tell me that she doesn't have it.

Shannon Courtenay may have won the fight and title, but champions come and go with the wind.

True fighters and their efforts of the heart last far longer in the heart and minds of boxing fans and historians and Ebanie Bridges showed that she belongs in the company of the most courageous.

I'll be watching her again. She's made a fan.

And that's something that I wouldn't have thought I'd type at this time yesterday.

Back later with a look at the Smith-Vlasov and Ennis-Lipinets fights from Saturday night.