Cleaning out the Inbox 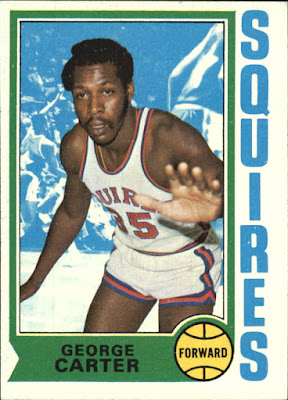 The inbox isn't quite overflowing, but there are a few interesting items of note and it is always good to stay caught up.

USA Today writes of the late George Carter, who passed away last November with next to nothing to show for a career that saw Carter as one of the best forwards in the ABA.

Carter averaged eighteen points a game in an ABA career that saw him play for seven different teams and Virginia twice but fell on hard times after his basketball career ended, suffering from throat cancer and had difficulties finding work.

The Dropping Dimes Foundation is an organization that helps former ABA players that aren't eligible to receive an NBA pension and yet with the ABA out of business, many of these players are out of luck.

Dropping Dimes has calculated that there are 105 living players that played three seasons or more in the ABA, but do not qualify for an NBA pension and that the NBA could pay each player $400 per month at a total of 1.8 million per year, which will become less each year as players pass away.

The NBA needs to do the right thing here and help these former stars out to live the rest of their life with a decent standard of living.

The Athletic writes of the short-lived Teddi Bears dance troupe' that danced at the Richfield Coliseum during sparsely attended Cleveland Cavaliers games during the Ted Stepien reign of error in the early 80s.

The Teddi Bear team included Stepien's daughter and as the article quotes from the media of the time, they were booed every night by the few fans watching Stepien's folly in Richfield.

I've often thought that the great sports book waiting to be written is about the three years of Cavalier basketball when Ted Stepien owned the team, and the Teddi Bears are just a small part of that.

The Atlantic wrote this article in May 2018 and it has to be read to be believed.

An expansion team purchased by a mobster.

Said mobster names the team after his waste management "business".

Brags about having TEN goons on his roster and watches them brutalize the league.

That's just the basics and for all of that craziness- The Trashers reach the league finals in their second year and never play another game.

Because the owner is indicted by the federal government.

A story that has to be read...