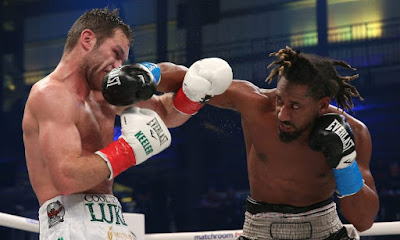 The boxing weekend showcases arguably the most avoided champion in the sport, a former champion making his first start since losing his title, and another former champion attempting to place himself in line for the winner of an upcoming unified title affair.

Andrade is avoided by every big name around his weight class, but he lacks even the solid level of challengers other than perhaps Maciej Sulecki on his resume.

Andrade's lack of aggression doesn't appeal to fans any more than it has to the bigger names and in hindsight, Andrade made a huge error against Sulecki when he knocked him down in the first round and seemed to be on his way to an impressive early win before his trainer and father told him in the corner to box more and take no chances.

Andrade won every round, but the fight went the distance and not an overly exciting distance fight either.

Williams is better than Andrade's past challengers, but even Williams has lost to his best opponent (Both losses at 154 pounds to Liam Smith) and his road to the title hasn't been strewn with top ten victims.

Williams may be the biggest threat to Andrade yet, but I still think he is a class (or two) under the champion.

The co-feature is interesting as undefeated super middleweight Carlos Gongura faces Christopher Pearson in what could be an explosive ending.

Gongura, who rallied from behind to stop unbeaten Ali Akhmedov in the final round of an excellent fight, is a former Olympian with excellent power and against Pearson, who was blown out in two rounds by Justin DeLoach, that power could come into play.

The main event on Fox pits former WBC junior middleweight champion, Tony Harrison, returning to the ring for the first time since his loss to Jermell Charlo against Bryant Perrella.

Harrison was fighting on even terms with Charlo before being stopped in the eleventh round of the rematch and has been a contender for years, so he's easily the favorite against Perrella, who was on his way to a win over Abel Ramos before stopped with one second to go in the final round in his last outing.

Harrison has been stopped in the late rounds of all three of his losses, but Perrella's not a huge puncher and isn't at his natural weight, so Perrella would have to change his usual tactics to take advantage of that weakness of Harrison.

Harrison's the proven fighter against championship-level competition and Perrella is moving up from welterweight, so while this isn't a squash match I'd be surprised if this one didn't go to Harrison.

All of the publicity for the Twiller pay per view is going towards the gimmick fights and while I support anything that can add attention and money to the sport, that doesn't mean that I have to care, so here at the boxing challenge/TRS we'll have Jake Paul in the boxing challenge when he fights a legitimate boxer.

Still, there is one fight that does deserve to be in the challenge as former WBA junior welterweight champion Regis Prograis staying active against veteran Ivan Redkach.

Prograis has only one loss, a narrow majority decision to WBA and IBF champion Josh Taylor, and could be in line for the Taylor-Jose Ramirez winner, should the victor decide to stay in the 140-pound division.

Redkach has made some great action fights such as his memorable four-round war with John Molina and occasionally pulls an upset as when he sent former champion Devon Alexander into retirement after knocking him out in six rounds.

Redkach also is recalled for his biting of Danny Garcia in a unanimous decision loss.

This appears to up to Redkach in how the fight ends.

Should he attack Prograis, he likely get stopped but it will be a fun firefight, if he fights more conservatively, Prograis wins a lopsided decision or stops him late.

In the boxing challenge, I lead Ramon Malpica 45-41.