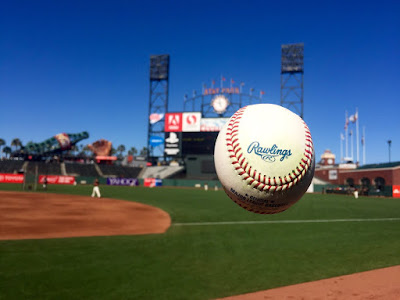 Jim Bouton wrote that phrase in Ball Four before the 1969 opener as he played for the Seattle Pilots and it has never been more true for me than this opener.

With a new item to feed my disenchantment with baseball every day for months it seems, it's now time for the game to take the field for what may be a full regular season.

I'm not going to do season previews, because honestly, I just don't feel like doing them, but because I've paid so little attention to the Cactus League (where both the Indians and Giants train), I'm not even sure I'd be satisfied with them.

I've written often of the litany of decisions and changes due to Rob Manfred and his reign of terror, but there's more than Manfred to disappoint me.

The Indians continuing to develop pitchers at a surprisingly stunning rate and their ineptness of doing so with outfielders ( the decision to keep Bradley Zimmer rather than Clint Frazier in the 2016 Andrew Miller with the Yankees could haunt this team), the unwillingness or inability (depending on whom you ask) of the Dolan family to spend any type of money on what could be a contender with a few roster moves, the state of the game that allows a home-grown superstar in Francisco Lindor to walk away because you cannot afford to keep them and if you actually tried you would handicap yourself to put a team around that player, and a stadium lease that expires after 2023 all add up to a storm around the Indians for me that makes it very difficult for baseball enthusiasm.

Add the continual rebuilding of the Giants in a division with the National League version of the "Evil Empire" and the suddenly cash-flush San Diego Padres with has-been's, faded prospects, and never were players has made the proverbial "need of a scorecard to tell the players" often for the Giants.

Even the networks that televise the games have cut their budget as the Giants, who won me over as a fan with late-night games with the best broadcast bunch in the game with Duane Kuiper, Mike Krukow, and Amy Gutierrez, won't have one-third of their unit doing the games as NBC Bay Area decided not to renew Gutierrez's contract and the team will not be using anyone in the reporter role this season.

Fortunately for Giants fans, Gutierrez was quickly hired by the team and will be doing all the types of features for the team website and social media that she had been doing for NBC Bay Area.

That's a smart move to keep someone that is very popular with the fan base in the organization by the team, but it shows the stress that the financial losses from last season aren't limited to the franchises.

The Indians bunch isn't awful, but it's not outstanding either.

They aren't top of the line as Kuiper and Krukow are, but they are decent enough and certainly aren't enough to make you reach for the remote button or your bottle of choice as can be the case with Pittsburgh's Greg Brown or Washington's F.P. Santangelo to name two.

I nearly did not order the MLB plan this season with my current feelings, but Cherie thought that I should in order to give me something to do with so little live baseball in store for me this season.

I know I've written often about having a summer without baseball in Hagerstown or Frederick, but for someone that was consumed by going to games for the last decade and a half, the summer looks very bland.

Assuming that things progress to anything close to normal, my season looks like a July visit to Harrisburg to see the Akron Rubber Ducks (Cleveland AA), one visit to Altoona in August for the Richmond Flying Squirrels (San Francisco AA), the usual trip to Eastlake, Ohio for the Lake County Captains (Now Cleveland's High A team) for their annual Cleveland Sports Night, and maybe a late-season trip to Lynchburg, Virginia for the Lynchburg Hillcats (Now Cleveland's Low A team), and that's likely the ballgame, no pun intended.

As far as autographing goes, I'm not sure many players will even sign at all and I'm not sure that I even care all that much.

I have decided that I still want to do the Indians minor league teams that I can and Richmond, as long as they stay with the Giants as Richmond is now the only Giants farm club on the East Coast, but otherwise unless a team has a coach or manager from the "old days" that I may need for a set, I don't think I'll be bothering with more than that.

The netting all over the field now and Covid have created an environment that has melted the hobby and without a team close by, I think I'm finished for the most part and that's saddening.

I've met so many great people during my collecting time, both on the field and in the stands, so I'll miss that, but I see no other choice.

It's a crazy time in baseball as a man and his minions seem bent on twisting a game away from the people that love it most to favor others that aren't likely to care no matter what they change.

Hopefully, I can find something that I can continue to care about as the marketing majors and bean counters take a game I love and pass me by...