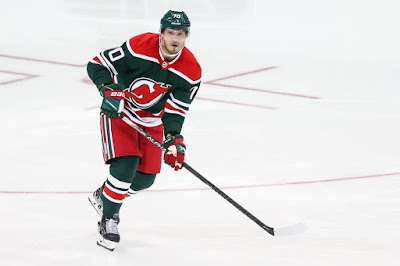 Tom Fitzgerald didn't stop after his previous trades before the deadline as the New Jersey Devils made one final trade on deadline as the team traded veteran defenseman Dmitry Kulikov to the Edmonton Oilers.

New Jersey will receive Edmonton's fourth-round pick in the 2022 draft, but should the Oilers win their first-round playoff series, the Devils pick will be upgraded to a third-rounder in the same draft.

The 30-year-old Kulikov had signed with New Jersey for 1.1 million on a one-year deal before the season and played well in his stint in Newark as a solid, defense-first blueliner that didn't score a goal in his thirty-eight games and finished with two assists.

Kulikov isn't a playmaker type, but I thought his solid season and a cheap contract would attract a team that could slot him in as the type of defenseman that can play on your second or third pairing.

I thought that Kulikov's play might fetch as high as a second-rounder, but trade-deadline seasons can vary and as All About the Jersey stated, it's all about what someone is willing to pay and we are in a time where Kyle Palmieri and Travis Zajac brought a larger return than Taylor Hall did for Buffalo, so you take what you can get.

I mentioned yesterday that the Devils had placed Sami Vatanen on waivers and perhaps his assist in last night's loss to Pittsburgh gave the Dallas Stars some hope with the veteran, as Dallas claimed Vatanen off waivers and will have the veteran for their next game.

Vatanen finishes his second tour as a Devil with two goals and four assists in thirty games.